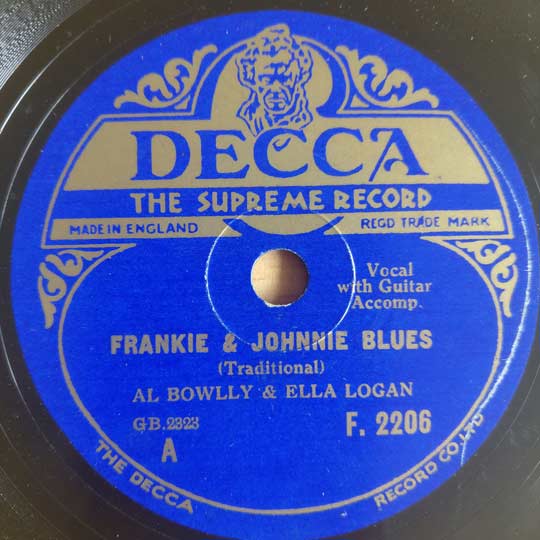 Now Frankie and Johnny were sweethearts
As ev'rybody knows
How she paid a hundred dollars
Just to buy her man a suit of clothes
He was her man, but he done her wrong

Frankie went down to the barroom
Ordered a bottle of beer
She said, "Now look here, Mister bartender man
Have you seen my lovin' Johnny here?
He was my man, but he done me wrong"

Frankie went into the pawn shop
She didn't go right in for fun
And when she came out from that Jew man's store
She had an (Art Johnson ??) forty-one
For to shoot the man that had done her wrong

Then Frankie went down to the hot joint
Rang that hot joint bell
She said, "Now look out all you harpies
I'm gonna shoot that man to......
He was my man, yeah, but he done me wrong"

A hundred dollar coffin
And a decorated hack
They took that gambler to the graveyard
But they never, never brought him back
'Cause he was her man, but he done her wrong

They took poor Frankie to the jailhouse
And they locked poor Frankie in the cells
She said, "I don't give a darn, Mister jailhouse man
Another man gone to......
He was my man, but he done me wrong"

The Judge he said to Frankie, "Look her little girl
Don't you make those eyes at me (ELLA: I won't make no eyes)
For the jury have found you guilty
Of murder in the third degree (ELLA: I didn't shoot my man)
You shot your man, you certainly did
But he done you wrong (ELLA: He done me wrong)