Al Bowlly was a South African born British jazz crooner during the British dance band era of the 1930’s. He recorded more than 1,230 tracks between 1927 and 1941. His most popular songs include "Midnight, the Stars and You", "Goodnight, Sweetheart", "The Very Thought of You", "Guilty" and "Love Is the Sweetest Thing"

His Greek and Lebanese parents met en route from the USA to Australia. They started a family in Australia but then moved to the Portuguese colony of Mozambique in East Africa. Al Bowlly was born in Lourenço Marques, now the capital city Maputo. In 1903 the family moved and settled in South Africa.

Here is a link to Michelle Phitidis Adams' Facebook page with wonderful pictures of the Bowlly family.

Here is a timeline of musicians in Al Bowlly’s musical career:

Bowlly was brought up in Johannesburg. After a series of odd jobs across South Africa, including barber and jockey, (a)"... started to sing and play ukulele in Edgar Adeler’s Band around Johannesburg. Edgar’s ambition was to come to England so he proposed to the boys in his band that they should work their way to London. This they did, touring through Rhodesia, East Africa, the Indian sub-continent and the Far East. Edgar Adeler later recalled that Al had a voice ‘out of this world’. Al and Adeler had an argument en route and went their separate ways”. Al was fired from the band in Surabaya, Indonesia. 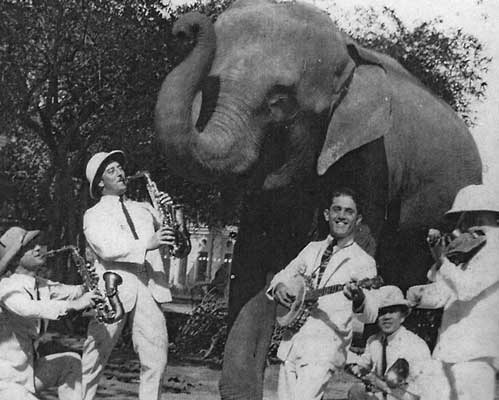 He was then employed by Canadian, Jimmy Lequime to perform at The Grand Hotel in Calcutta and at the Raffles Hotel, Singapore. In April 1926, (c) "trumpet player Jimmy Lequime and his band trooped into the HMV studios in Dum Dum to cut India’s first discs of “hot music”, as the genre was called before the word jazz became popular. The songs were titled Soho Blues and The House Where the Shutters Are Green." It was Al Bowlly's very first record and was released on HMV P-7094. It features Al Bowlly on banjo and Pete Harmon on vocals.

(c)"Lequime had been hired to play at Calcutta’s luxurious Grand Hotel after burnishing his reputation in a nightclub in Shanghai called Mumm House. A wild port city with a taste for everything new (especially if it had a tinge of hedonism), Shanghai was already an important rendezvous for journeymen jazz musicians. Lequime’s band at Mumm House consisted of the trombone player Nick Ampier from the Philippines (a former US colony with a fondness for American pop culture), the Russian pianist Monia Liter (one of many conservatory-trained “White Russian” musicians who flooded through Asia after the 1917 revolution in their country), the American drummer Bill Houghton and his compatriot Pete Harmon. In addition to playing both alto and soprano sax, Pete Harmon was a sensation in Shanghai for his Al Jolson-style big, brash singing. When the Grand Hotel hired him to bring a big jazz outfit to Calcutta, Lequime supplemented his Shanghai band with Russian sax player Joe Speelman, American reedman Claude “Sax” MacGuire and Vic Halek, an Austrian who doubled up on violin and alto sax. Upon their arrival in Calcutta, a young man named Al Bowlly offered his services as a vocalist and banjo player."

(c)"At his audition for Lequime, Bowlly’s banjo playing was deemed adequate but his vocal style was considered pretty sissy and, evidently, afforded the rest of the band much amusement. So when they went into the record studio, Pete Harmon was the man at the mike." 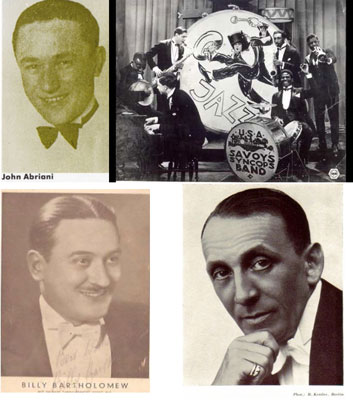 In 1927 Bowlly finally made it to Europe and made up with Edgar Adeler in Berlin. He made his first vocal record, a cover version of "Blue Skies" by Irving Berlin. It was recorded with Adeler on piano and Al on Hawaiian guitar. The other side was, Say, Mister! (Have You Met Rosie's Sister) with piano and banjo. 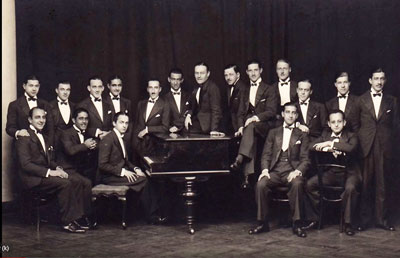 In 1928, Len Fillis, one of the finest guitarists who played with the great British dance bands of the 1920's and 30's was in the superlative "Hot" jazz orchestra of Fred Elizalde. Elizalde had a residency at the Savoy Hotel in London and was looking for a vocalist. Len Fillis was an old friend of Bowlly's from South Africa. He contacted Bowlly, who send Elizalde a copy of his recording of Muddy Water. On hearing it Elizalde immediately sent Bowlly the money to come join his band in London.

Unfortunately, the Savoy management wanted Fred Elizalde & His Band to play sweet music for dancing. When Elizalde refused, his contract was not renewed and Al Bowlly found himself out of work. He had only recorded a few sides with Elizalde and was now doing any session work he could find. Most of these sessions were with various bands of Len Fillis. (a) "He is even reputed to have resorted to busking to theatre queues in order to make ends meet."

1930 was a better year and Bowlly continued his free-lance work and recorded dozens of sessions with an assortment of bands. In mid, 1930 he had a huge break, he met Ray Noble, the musical director at HMV and in April 1930 he recorded several, now very rare sides in Afrikaans; records for the South African market. These were not successful but he had made an impression on Ray Noble. 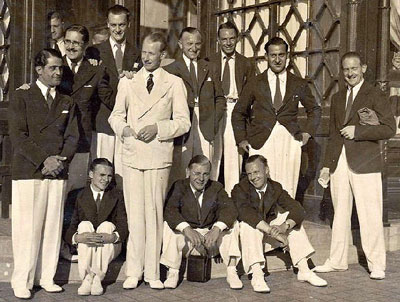 In November 1930, Ray Noble invited Bowlly to join his HMV house band, The New Mayfair Dance Orchestra. This was purely a recording outfit, apart from a very short tour of Holland in 1933, the orchestra was based in the recording studio. Hundreds of records were cut. Songs like, Goodnight Sweetheart, Love is The Sweetest Thing and The Very Thought of You, making Al Bowlly a star. Ray Noble was meticulous in the studio and being only a recording outfit, he had the pick of all the very best musicians in London. 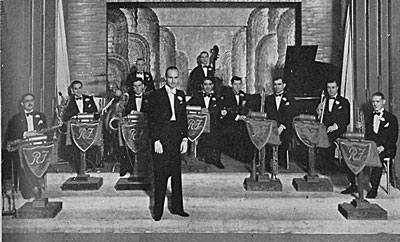 The other major break for Al Bowlly happened in January 1931 when he was signed by the American band leader, Roy Fox to record for Decca. Within a few short months, The Roy Fox Orchestra also scored a residency at the newly opened, Monseigneur Restaurant in Piccadilly. There were regular live radio broadcasts from the restaurant and soon the band and Al Bowlly were a huge success. The band featured the great, Lew Stone on piano and arrangements. He was the musician’s musician and was basically already running the band.

In late 1931, Roy Fox fell ill with pleurisy and his doctors sent him to Switzerland to recover; leaving Lew Stone in charge. Roy Fox was absent from November 1931 to April 1932. On his return, he resumed control of the band but when the band's contract came up for renewal in the autumn of 1932, Roy Fox and the management at the Monseigneur couldn't agree on terms. The management, then offered the job to Lew Stone. Most of the band wanted to stay with Lew Stone, including Al Bowlly. Roy Fox tried to hold onto "his" most valuable singer but lost in court. He then formed another band with Sid Buckman at the Cafe Anglais in Leicester Square. 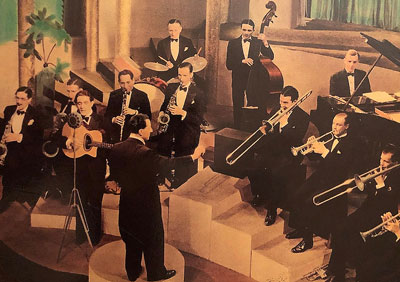 As Lew Stone & The Monseigneur Dance Orchestra till October 1933 and then as Lew Stone and His Band. The band now under Lew Stone, over the next few years, produced some of the very best British dance music of the era. Bowlly's phrasing and timing were fine-tuned and sublime. He was at the peak of his career and busy with, theatre dates, radio and studio sessions. (a) "The critics acclaimed him as our top vocalist."

On 30th July 1934, Al Bowlly made his very first film short for Pathe, Pathetone Weekly No 227. The Very Thought of You accompanied by Monia Liter on piano. 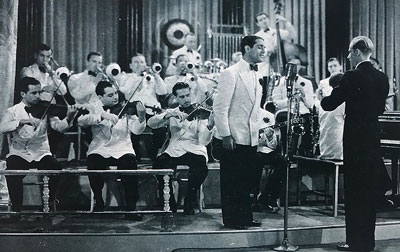 Ray Nobles recordings with Al Bowlly were immensely successful, even selling well across the Atlantic in America. In late 1934, Ray Noble was offered a residency starting May 1935 at the world famous, Rainbow Room at the top of the Rockefeller Centre in New York City. He took along with him, drummer Bill Harty as his business manager and Al Bowlly, who in many ways was the sound of Ray Noble’s success.

In American, The Musicians' Union had strict restrictions on foreign musicians but not on vocalists. On arrival in New York City, Bowlly immediately went to work as a vocalist recording a few tracks with Victor Young directing an orchestra and several classic sides as a soloist with Ray Noble directing the orchestra. Ray Noble, meanwhile was putting together an orchestra for the Rainbow Room. The local musician he used to assemble the orchestra was the one and only, Glenn Miller, who would rocket to worldwide fame in the swing era. This famous orchestra recorded dozens of excellent sides and regularly broadcast from the Rainbow Room. The orchestra was also featured in "THE BIG BROADCAST OF 1936", but Al Bowlly's contribution was cut as the program already featured a vocalist, Bing Crosby. By the end of 1936, at the end of the Rainbow Room contract, Ray Noble had been offered work on a radio show and Al Bowlly decided to head back to England. Then Bowlly did a few trips back and forth across the Atlantic:

1938 saw Al Bowlly settled back in England where he recorded almost a hundred tracks with an array of fine orchestras. Maurice Winnick and his Sweet Music, Sidney Lipton and his Grosvenor House Orchestra, New Mayfair Orchestra under Ronnie Munroe, Mantovani aho, Felix Mendelssohn aho, as well as with his own orchestra and with many soloists. He also got back together with Lew Stone and his Band. Thinks were looking up but the heydays of the British Dance Bands were coming to an end.

From late 1938 to April 1939, Al Bowlly recorded over 30 tracks with Geraldo and his Orchestra. These sides are considered by some as his finest works. He also continued recording with several other bands and orchestras including a couple of sides with Ken Snakehips Johnson & his West Indian Orchestra. Bowlly would frequently go down to the London nightclub Café de Paris to join Snakehips on stage. On 8 March 1941, during The Blitz, the club was bombed. (d) "Around 80 people were injured and at least 34 killed, including 26-year-old Johnson". Bowlly was not there that night but he saw it as an ill-omen and was profoundly shocked. 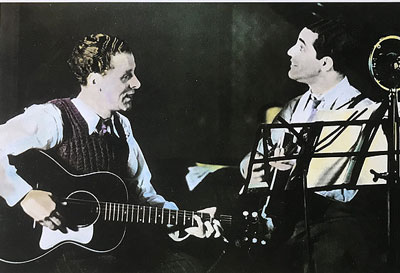 Shortly after World War II was declared, Bowlly teamed-up with Jimmy Mesene, a Welsh singer/guitar player of Greek descent. They became "The Radio Stars with two Guitars". They recorded only 14 tracks from June 1940 to April 1941. They toured the country, playing small venues. Their last date was at the Rex Theatre in High Wycombe. On 2nd April 1941, Al prophetically recorded his last ever record together with Jimmy. "When That Man Is Dead and Gone", a protest song against Hitler and "Nicky The Greek (Has Gone)" 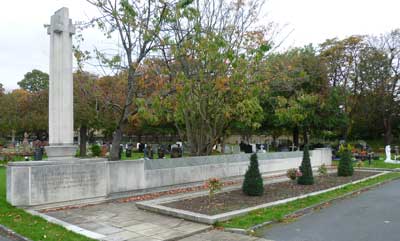 (a) After the show, Al returned to London to see his doctor as his throat had been troubling him again. He returned to his flat in Dukes Court, Piccadilly as London was suffering one of its heaviest air raids. Instead of taking cover in the air raid shelter, Al was sitting up in bed reading a cowboy book. Outside, a German bomb came silently down and exploded in the street outside Al’s window. After the "all-clear" had been sounded, the caretaker made his rounds to see that everyone was all right. When he entered Al’s apartment, he found him dead in bed, killed outright by the blast from the bomb."

Al Bowlly is buried in a mass grave at the City of Westminster Cemetery, Hanwell, London.